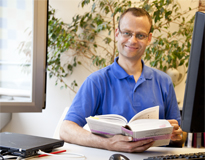 Stefan Benkler was born in Bern, Switzerland, in 1974.

In 2003, Stefan joined the IT'IS Foundation, where he concentrated on improving the effectiveness and application range of conventional FDTD schemes. At about the same time, he joined the Laboratory for Integrated Systems (IIS) of the ETH Zurich to begin work on the PhD degree, which he finalized in December 2006, focusing mainly on developments and efficient implementations of subcell models to enhance real-world electromagnetic FDTD simulations.

Stefan's main research interests include applied mathematics, HPC, and time domain methods. In 2007, he joined Schmid & Partner Engineering AG (SPEAG) as a software developer of the numerical aspects of the EM simulation platform SEMCAD X. His focus on HPC and software design involves integration of numerical solvers into the simulation platform, and aside from developing his own HPC kernels, he coordinated the development of various SEMCAD solvers.

Stefan is an expert in computational techniques and related math with particular interest in FDTD and FE methods. His experience in low frequency techniques and human body applications led to his appointment to a position as a senior software developer at Zurich Med Tech (ZMT) in October 2012.

Stefan returned to IT'IS in October 2017 as part of the o2S2PARC team.