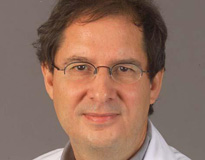 He was a resident in Internal Medicine in the Department of Medicine of Kantonsspital Baden from 1985–1987 and of University Hospital Zurich from 1987–1989. From 1989–1991, he served as a Clinical Fellow in Medical Oncology and as a Research Fellow in the Department of Hematology/Oncology and Molecular Pharmacology at the Institute Gustave Roussy in Villejuif-Paris, France. He was a resident in Radiation Oncology at the Joint Center for Radiation Therapy, Harvard Medical School, Boston, MA, USA from 1991–1995, and, from 1993–1995, he was additionally a Research Fellow in Pediatric Oncology at the Dana Farber Cancer Institute in Boston and the Massachusetts Institute of Technology Cancer Research Center and Department of Biology, Cambridge MA. He served briefly as an attending physician in Radiation Oncology at Brigham and Women’s Hospital in Boston before returning to Switzerland as an instructor at the University of Zurich Medical School and attending physician in Radiation Oncology of the University Hospital Zurich. In March of 1998, he became Assistant Professor of the University of Zurich Medical School and was promoted to Professor in September of 2004.