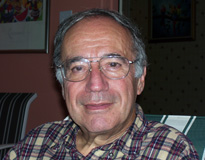 Quirino Balzano was born in Rome, Italy, in December 1940. In 1965, he received the Laurea of Doctor in Electronics Engineering from the University of Rome, La Sapienza, Rome, Italy.

During 1966, he was at FIAT, SpA, Turin, Italy. From 1967–1974, he was with the Missile Systems Division, Raytheon Corporation., Bedford, MA. He was involved in the research and development of planar and conformal phased arrays for the Patriot and other weapon systems. In 1974, he joined Motorola, Inc., Plantation, FL. In 1987 he became Vice President of the technical staff and in 1993 Corporate Vice President and Director of the Florida Research Laboratories. He retired from Motorola in February, 2001.

Since August, 2002 Prof. Balzano has been at the University of Maryland, Electrical and Computer Engineering Dept., College Park, Maryland, where he is a Senior Staff Researcher and teaches a graduate course on antennas. His main interests are in the biological effects of human exposure to RF electromagnetic energy and the safe use of wireless technology.

He received the IEEE Vehicular Technology Society Paper Prize Award in 1978 and 1982 and a certificate of merit from the Radiological Society of North America in 1981 for the treatment of tumors with RF energy. In 1995 he received the best paper of the year award from the IEEE EMC Society. He is a Life Fellow of IEEE and former (2002–2005) Chair of Commission A of the International Union of Radio Science. He has written more than 50 papers on RF dosimetry near electromagnetic sources and the biological effects of RF energy. He has 31 patents in antenna and IC technology and has authored or co-authored more than 100 publications.

Hyperthermia: A Potential Game-Changer in the Management of Cancers in Low-Middle-Income Group Countries
10/01/2022
Launch of TI Solutions Early Adopter Program
03/12/2021
Copyright © 2010–2021 IT'IS Foundation
WHO WE ARE
RESEARCH
IT'IS