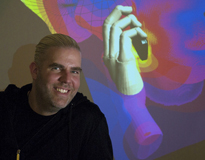 Nik Chavannes was born in Bern, Switzerland in April 1972. He earned his MS and PhD degrees in Electrical Engineering from the Swiss Federal Institute of Technology (ETH), Zurich in 1998 and 2002, respectively.

Nik joined the Foundation for Research on Information Technologies in Society (IT'IS) in late 1999 at the time of its formation. He is currently leading all software and numerics efforts at IT'IS, in particular related to computational electromagnetics (CEM) and the simulation platform SEMCAD X. The platform is being further developed in joint R&D efforts with several leading Swiss research institutions and industrial partners, Schmid & Partner Engineering AG (SPEAG) in particular.

His work is currently primarily concentrated at SPEAG, where he is responsible for software R&D activities, focusing mainly on innovations and implementations for SPEAG's major products, namely the experimental near-field scanner DASY as well as SEMCAD X. In addition, he is involved in various IT'IS projects related to EM near- and far-field assessment as well as dosimetry by means of computational electromagnetics.

In 1996, within the framework of ETH-supported practical training at the Siemens Microwave Research Laboratory in Zurich, Nik became acquainted with computational electromagnetics (EM) and the use of the 2-D Multiple Multipole Method (MMP). In the same year, he joined the Bioelectromagnetics/EMC Group (BIOEM/EMC) at ETH Zurich, where he widened his experience in numerical simulation techniques with the finite-difference time-domain (FDTD) method. From 1998 to 2002, Nik Chavannes was a Graduate Research Assistant within the Laboratory for Electromagnetic Fields and Microwave Electronics (IFH) as well as the Laboratory for Integrated Systems (IIS), both located at ETH Zurich. His Ph.D. thesis focused on the development of enhanced FDTD local refinement techniques and their application to numerical near-field analysis, antennas, and improved modeling capabilities in general. In early 2002, he joined SPEAG as head of the software R&D team.

Nik's primary research interests include the development, implementation, and application of computational modeling and simulation techniques to electromagnetics in general, and antennas as well as bioelectromagnetic interaction mechanisms in particular. Special emphasis is given to the usage of numerical simulations to support R&D processes with respect to forthcoming trends in fields of personal networking applications (pervasive and wearable computing, quality of life systems, and biometrics). His research activities have resulted in a number of scientific publications and book chapters, and numerous conference/invited presentations within the areas of theoretical FDTD-related electromagnetics, numerical and experimental near-field analysis, antenna design, and dosimetry. In addition, Nik gives lectures at ETH Zurich, serves as a reviewer for several IEEE journals, and acts as session organizer and session chairs at international conferences within the fields of his expertise.