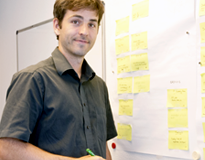 Bryn was born in Johannesburg, South Africa, in April 1980 and holds Swiss and British nationalities.

Bryn received his Master of Science in Electrical Engineering and Information Technology and PhD from the Swiss Federal Institute of Technology (ETH Zurich), Switzerland. After conducting his MSc thesis on intra-operative image registration at the Surgical Planning Laboratory in Boston, he joined the Computer Vision Laboratory (BIWI) at ETH Zurich, where he was involved in a project called CO-ME, sponsored by the Swiss National Science Foundation. The focus of his PhD research was on virtual reality surgery training simulators and multi-physics computational modelling of tumor angiogenesis.

Bryn has been working at IT’IS since 2011 and is currently leading the Virtual Population group. He has experience in unstructured mesh generation, finite element modelling, medical image analysis and computer graphics. He has been leading the development of morphing and registration of anatomical phantoms at IT'IS. Currently, he is managing a Swiss-Korean CTI project called NEUROMAN, with the purpose of establishing computational anatomical models for simulating the interaction of neuronal dynamics in electromagnetic fields.

In addition, Bryn has been a core developer of ZMT's Sim4Life simulation platform since its inception, and has more than 10 years of experience as a software developer. He is the lead architect of Sim4Life's analysis framework, and been involved in numerous other modules, such as the 3D modeler, thermal and acoustic solvers, mesh generation, 3D visualization, and various UI components.