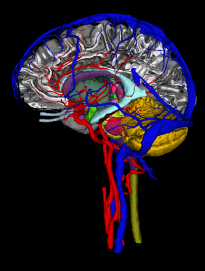 The Virtual Population 3.0 constitutes the next milestone in computational anatomical phantoms. Imminent challenges are models with functionalized anatomies, i.e., that capture the dynamics of physiological processes. A novel functionalized high-resolution head model and an EM-neuron simulation environment for in silico research was developed by a joint effort of IT’IS and the Office of Science and Engineering Laboratories at the U.S. Food and Drug Administration. The new head model enables investigation of EM-neuron interaction-based applications and exposure safety, and of devices such as neuro-prosthetics, deep-brain stimulators (DBS), and neuro-motoric incapacitation devices.