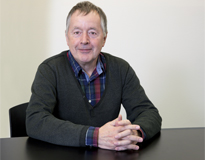 Heinrich Walt (HW) is a tumor biologist who got his degrees (master diploma and Ph.D.) at the Universities of Zurich and Fribourg, Switzerland.

After a postdoc phase performing cancer related research projects at the Institutes of Anatomy and Pathology of the University of Zurich, he built up a new Research Division of Gynecology at the Department of Gynecology, University Hospital Zurich from scratch. In 1993 he received his title as a professor from the medical faculty of the University of Zurich. Today he is group leader of oral oncology research at the University Hospital of Zurich, Department of Cranio-Maxillo-Facial Surgery (Director: Prof. Klaus W. Grätz). Heinrich has strong scientific connections to the Jackson Laboratory, Bar Harbor, Maine, USA (TJL, Prof. Rick Woychik, Director). In 2006 he was appointed Adjunct Professor to TJL. From 2003-2008 he served as president of the Swiss Society for Oncology.

In 2008 he became vice-president of a new organisation, called European Platform for Photodynamic Medicine. This organisation is involved in the promotion of photodiagnosis and photodynamic therapy and includes nanomedicine as well. It fosters the formation of consortia for EU-projects. In parallel, Heinrich serves as an associate editor of Photodiagnosis and Photodynamic Therapy, a new scientific journal which recently became  listed at MedLine.

In 2010 he became a board member of the Foundation for Research on Information Technologies in Society in order to develop new projects to fight against cancer.